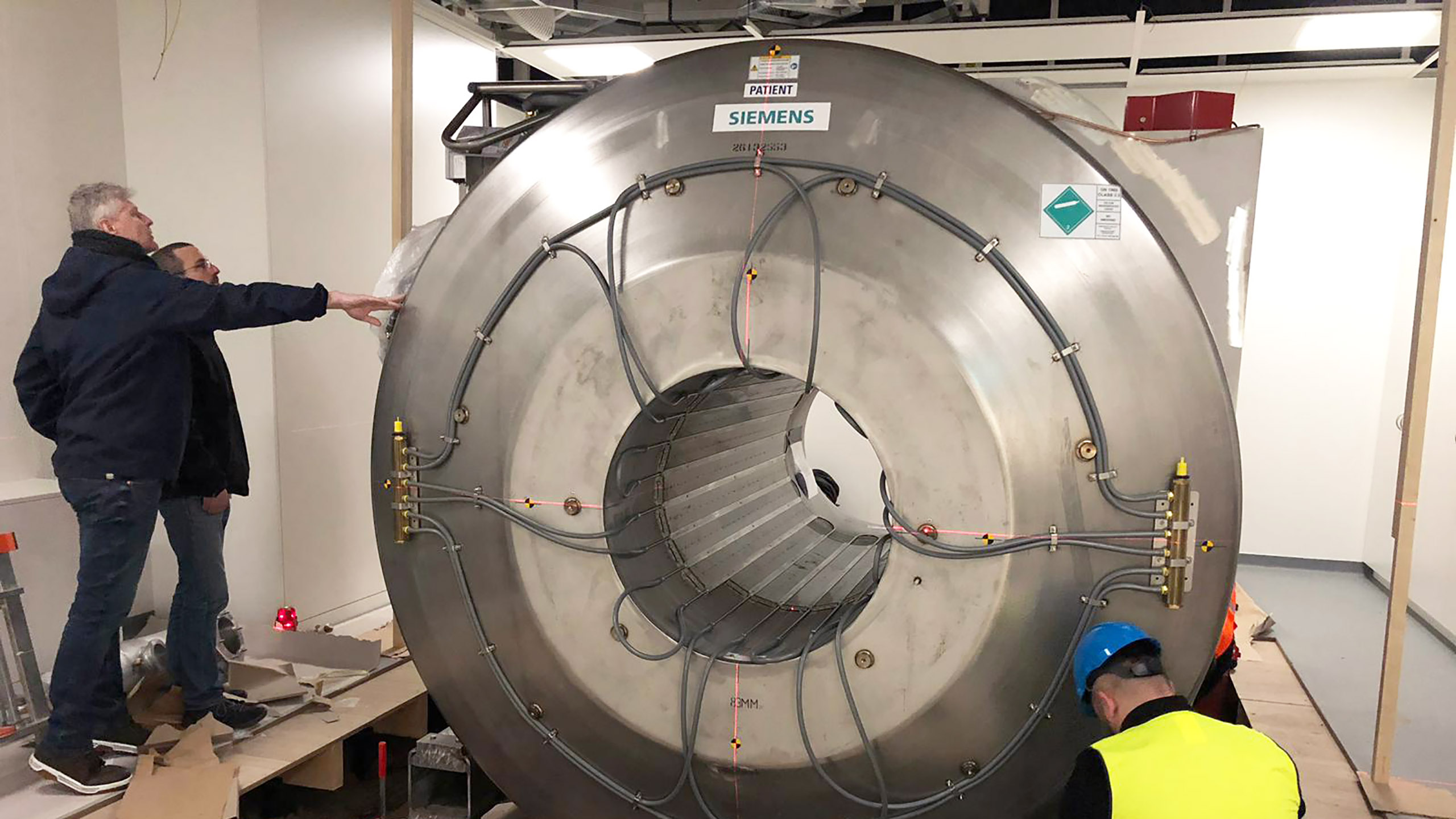 This was a delicate operation that took place at the Cyclotron Research Centre on the Sart Tilman campus of the University of Liège. The 7 Tesla MRI scanner, a new ultra-high field neuroimaging device, was delivered to GIGA-CRC-In Vivo Imaging by Siemens Healthineers.

eighing no less than 20 tonnes, the magnet was transported from Oxford to Liège via Calais, before being carefully placed by crane, through the removable roof of the new building adjacent to the CRC, specially built to accommodate the new MRI.

The University of Liège is the first university in Belgium to be equipped with this state-of-the-art neuroimaging device. MAGNETOM Terra is an MRI system with a magnetic field of 7 Tesla, 140,000 times more powerful than the Earth's. The scanner is based on zero helium evaporation technology (Zero Helium Boil-Off).  Thanks to helium, the magnet's temperature is lowered to -270°C, making it superconductive, allowing high electric currents to create a magnetic field of 7 Tesla. The stronger the magnetic field, the higher the resolution of the images. This is why this MRI is even more powerful than the 3 Tesla scanner that CRC already has, and which will continue to be used by researchers.

The new MRI will be exclusively dedicated to neuroimaging research. The level of infra-millimetre resolution of the brain structure and the possibility of detecting with minute precision variations in the activity of the brain in action will allow the continuation of the international level work that ULiège's scientific teams are already renowned for in the field of neuroscience.

"To deepen our knowledge of brain physiology and pathologies as well as our research in cognitive neuroscience, we must be able to study ever smaller nerve structures and cells, explains Professor André Luxen, head of the GIGA-CRC platform. MAGNETOM Terra is capable of creating images of living human brains with a very high isotropic spatial resolution of 0.2 mm. These ultra-high resolution medical imaging techniques are essential to achieving our goals."

IRM 7 Tesla is financed by Wallonia, the European ERDF funds, the FNRS and ULiège. It is also intended for use by nearby universities. The first images will be generated in the coming weeks after the installation of the device has been completed. The inauguration is scheduled for the beginning of next academic year. The MAGNETOM Terra 7 Tesla MRI was installed at the ULiège Cyclotron Research Centre (GIGA-CRC-In Vivo Imaging) in mid-February 2019. A technical and precision feat!